Who: GoodLife Fitness, with Gut Toronto for strategy and creative; Fela for production (Jackson Tisi directing); Dreambar for VFX, and SNDWRx for music. Media by Carat.

What: “What Makes a Fitfluencer,” a campaign addressing the rise of online fitness influencers by showing that anyone can inspire others to be their best selves, not just those who are already in tip-top physical shape and have millions of online followers. It is Gut’s first work for the brand since winning the account.

When & Where: The campaign is in market now, led by a 30-second TV spot, and supported by connected TV, social (including TikTok), digital, search and out-of-home. 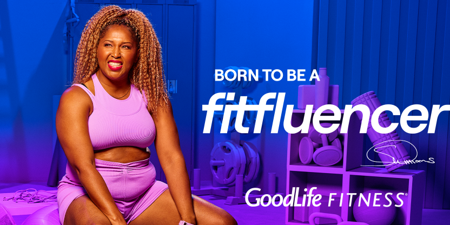 Why: The company is “reclaiming” fitness for everyone with this campaign, said Nicole Pekerman, GoodLife’s VP of marketing.

While other consumer sectors such as beauty and dating services have increasingly been featuring real people in their marketing, the fitness category has been lagging behind, she said.

“We’re still seeing the norm in this vertical being six-pack abs and the little bead of sweat on a brow,” said Pekerman of typical category advertising. “That can be very unattainable and sometimes digitally altered, and that can make people feel really nervous.”

Consumer perception of fitness can be shaped by these online “fitfluencers,” another of the trends to come out of the pandemic, when gyms were closed and people looked online for fitness content.

But at the same time, there are some questions about their fitness credentials. According to a study out of the University of Alberta, the “vast majority” of exercise bloggers are not qualified to give advice, meaning they have the potential to contribute to “misinformation and unhealthy behaviour.”

How: Fitness advertising tends to feature idealized versions of people pursuing a fitness regimen, but all of the people featured in the out-of-home and digital creative are actual GoodLife members or employees who look like the general population, complete with the occasional belly, ample bottom, etc.

They were solicited via a national casting call last month that generated more than 3,000 applications. The person in the main video ad is a GoodLife member, but also a professional actor, while the background stars are also GoodLife associates and trainers.

The 30-second anchor spot takes viewers inside an actual GoodLife gym in Oakville, Ont., where a woman is working out. The spot’s goes to great length to portray her as an everyday person, with a lingering shot of her belly protruding ever-so-slightly over the waistband of her workout pants. The background actors also don’t look like the people depicted in much fitness advertising.

“There wasn’t much debate about the necessity of showing real people enjoying their workout and going through different journeys,” said Pekerman. “As we went into the creative development process, we wanted to understand what our brand’s future looked like, and the words that kept coming up were ‘real’ and ‘authentic,’ and in order to appear real and authentic, we thought what better way than using real people who attend our gyms every day. There’s nothing more real than that.”

The spot follows the women’s fitness journey, while an accompanying voiceover asks questions about what makes someone a “fitfluencer”—whether it’s a six-pack, millions of followers and 20% off promo codes, or perfecting selfies and inspirational quotes. “Nah, being a fitfluencer is just getting up and showing up, trying again the next day. And the next,” says the voiceover.

The return of the fitness industry? While there has been speculation that fitness is one of the industries that will never regain its pre-pandemic status, Pekerman said that GoodLife is gradually seeing its business come back. The company registered 3.37 million check-ins at its just over 200 clubs across the country last month, and members are participating in approximately 20,000 “on-demand” digital classes or workouts each month.

“We’ve evolved ourselves to be a on-demand and digital fitness solution as well as a bricks-and-mortar solution,” said Pekerman. “What we’re seeing is that people are craving a little bit of community.”

And we quote: “Someone with the perfect body achieving results and influencing in the fitness space is the norm. But seeing an average person on their journey to a healthier lifestyle, that’s much more relatable and also more inspiring.”  Brynna Aylward, executive creative director, Gut Toronto